For those interested in learning about the history and politics of the UAE, Qasr al Muwaiji, almost a 100-year-old mud-brick fort, may be a perfect place to explore. It was built by H.H. Sheikh Khalifa bin Zayed bin Khalifa and used as a diwan (a council or seat of governance).

In 1946, Qasr al Muwaiji passed to H.H Sheikh Zayed bin Sultan Al Nahyan. More people started to gather together at the fort, so some changes were needed. The diwan complex, kitchens and guest rooms were made bigger; the mosque was also almost rebuilt.

In 1966, Sheikh Zayed and his son HH Sheikh Khalifa moved to Abu Dhabi, and the fort was abandoned. The process of its restoration began in the 1970s. In 2012, Qasr Al Muwaiji was declared a UNESCO World Heritage Site. 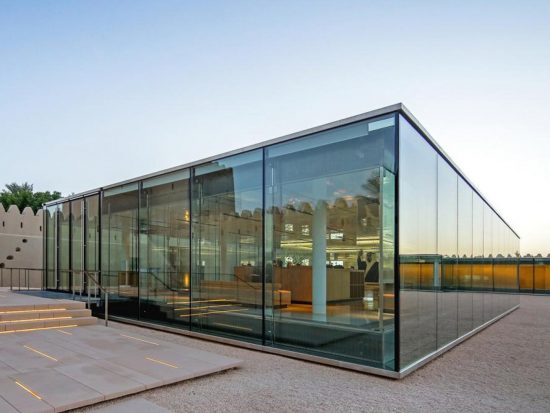 It opened up for the public in 2015. There is an exhibition arranged in a space with glass walls, which tells the story of the fort and the members of Abu Dhabi’s ruling family connected to it. The exhibition gives one an opportunity to get closer to H.H. Sheikh Khalifa bin Zayed — learn about his life from childhood to impressive achievements. Visitors can also learn about the history of Qasr Al Muwaiji: see how it has developed over the years.

Qasr Al Muwaiji is not only of great importance from the historical point of view. It is also a cultural center offering a number of events and workshops to participate in: for example, poetry evenings, the Falconer’s Camp, and Bisht workshop which tells about the Emriati Bisht (a traditional men’s cloak) and the way it is made.

The fort is closed on Mondays. There is no entry fee.

To get more information, please visit the official webpage of the fort.