Various artists are now showcasing 65 works of art, including British artist Richard Hudson with his sculpture, Unwind, in the DIFC Sculpture Park. The exhibition will be open to the public until June 30, 2022.

The shiny surfaces of the sculpture Unwind reflect their surroundings, encouraging exhibition visitors to engage with the space and immerse themselves in the artwork. As one looks at his sculpture while moving around it, it continuously changes, presenting entirely different forms. Its three-dimensionality is dynamic, not static, reminding us of our own ephemerality.

Most of the artist’s sculptures are quite big, made to be seen outside. There is a constant play of images – sky, sun,  transformed versions of trees and people around. The sculptures have a precise geometry, but not one of triangles, squares and rectangles. Instead, it is a geometry of curves. “Line is the most important thing to me, the continuity of it … I like sculptures that flow,” says  Richard Hudson.

“The sculptures of Richard Hudson stand at the juncture of the beautiful and the sublime. In the classic 1757 publication A Philosophical Treatise, the thinker Edmund Burke defined the qualities of beauty to include smoothness, with parts ‘not angular, but melted into each other’. Like Hogarth’s Analysis of Beauty of two years earlier, Burke identified curves as being one of the constituents of beauty,” writes Michael Goedhuis, “Such curves ‘vary their direction every moment…they change under the eye by a deviation…for whose beginning or end you will find it difficult to ascertain a point’. Though written over 250 years ago, these words will resonate with anyone who has encountered a Richard Hudson sculpture.” 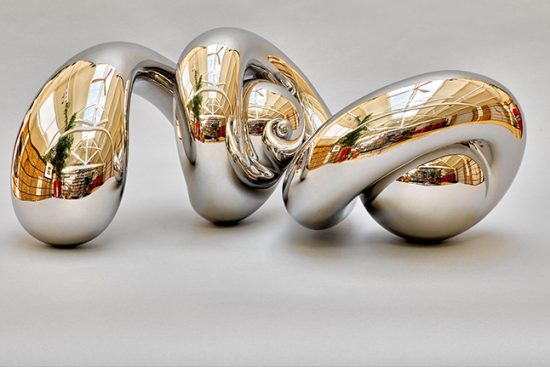 Richard Hudson makes polished mirrored artworks from marble, wood, steel, and bronze. His organic sculptures are shown internationally and collected widely. The artist creates sculptures that have a complex relationship with a number of major Modernist traditions in art. He has been inspired by artists such as Henry Moore, Jean Arp, and Constantin Brancusi. His works’ surrealist forms are simultaneously abstract and referential.