Mohamed Al Mazrouei’s solo exhibition NO is now taking place at Aisha Alabbar Gallery.  Mohamed Al Mazrouei is a prominent Emirati artist and poet. In his exhibition, he has united his new and old works dating back to the 1980s, showing his interest in language’s dynamism.

The artist’s first exhibition at the gallery was inspired by a textile piece found along the street in Cairo. The English word “NO”, which was printed on the materile, reflected his current personal feeling of alienation and orientation, something like estrangement or nostalgia.

Mohamed Al Mazrouei’s creative work can be described as autobiographical, since he uses memories as inspiration. He has also been influenced by the exploration of identity and African masks; his uses sources from around the world in his artworks.

Often called a ‘neo-expressionist’, the artist is famous for bold expressions, particullary in his paintings of portraits with dark eyes, figures and visual experiments. The faces and bodies are deliberately distorted to emphasise desire, petulance, and rage, sometimes in a provocative and horrifying manner.

In NO, elements  or a theme are intentionally repeated in an artwork. The artist’s unique visual language uses repetition, where elements are experienced as pure forms, balanced between primitive instincts and learned awareness.

Mohamed Al Mazrouei studied ancient languages and philosophy at college. In 1986, he moved to Abu Dhabi where he worked for The Cultural Foundation and proved himself to be an artist, writer and photographer as well as manager of the Emirates Writers’ Union. The artist has had a number of solo exhibitions in the Middle East as well as participated in many group exhibitions locally and abroad. 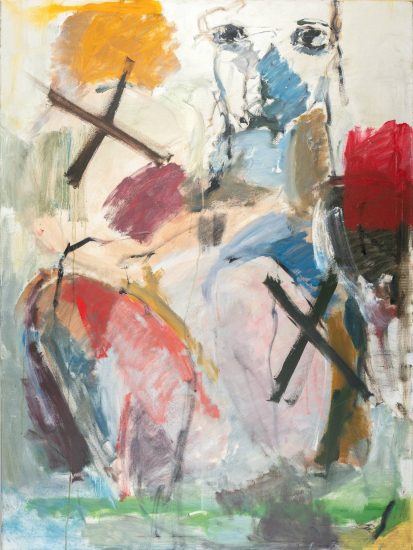 Aisha Alabbar Gallery is one of the first Emirati-led galleries in Dubai. It showcases contemporary and modern art by Emirati pioneering artists. Also, the gallery does business with famous curators, who invest considerably in order to bring the art of talented artists to the world.